Masks are required when visiting the MC&EM.
Learn More 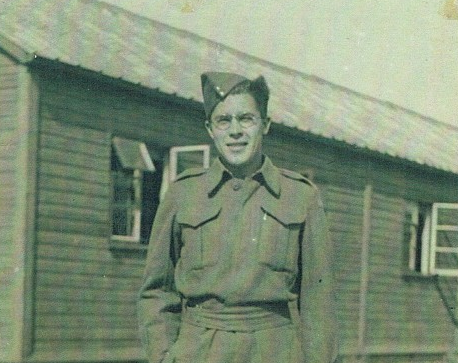 At the age of 20 years he joined the army on August 8, 1942 at Kingston Ontario. His occupation was listed as a truck driver and an electrician. After 2 months of Basic Training Pte Whetung was transferred to the Royal Canadian Corps of Signals (RCSigs); designated as a Signalman (Sigmn) and transferred to the Canadian Signal Training Centre (RCSTC) at Barriefield, Ontario. There Sigmn Whetung was trained as a Lineman and sent overseas in March, 1943. He remembers leaving England and getting ready to go over to France.

“Then we had telephone poles and I had a telephone pole trailer behind the truck and I wasn’t used to backing up a trailer or anything like that or driving a truck with a trailer on it either. But I knew how to drive a truck. Anyway, we got our stuff loaded on a boat in England. We were supposed to go into France the day after D-Day, but one of these flying bombers, things that they were sending over from Germany hit our boat in the night and destroyed the rudder on it or something, some part of it. But the boat was still floating in the dock there the next day, but they couldn’t drive it over to France, so we had to unload all our stuff and put it on another boat and then go over the next day after that. So we got in there three days after D-Day.”

On August 8, 1944 Sigmn Whetung was awarded his 1st Good Conduct Badge. As the war progressed, he installed telephone lines and fortunately was able to escape from many dangerous situations. He was instrumental in running lines from Juno Beach to Brussels, Belgium and beyond. At the end of the war and the capitulation of Germany Sigmn Whetung was sent to Germany where he continued to set up communications systems for the Canadian Army.

“And we moved into that and, and we had to set up a base for the, what they called the 2nd Echelon of the Canadian army. And the executive of the 2nd Echelon was in Bad Salzuflen. And the workers were down in Lemgo. And they’re all hooked up to the telephone lines right back to London. So we got in there and they set up a bunch of teleprinters [telegraphic instrument] and I think we had nine or 10 teleprinters and 120 telephone lines, and that on our exchange. And we had teleprinter operators. We had about 25 of them and they would work shifts; and keep the teleprinters working all 24 hours.”

Sigmn Whetung was discharged on December 4, 1945.

He was awarded the following medals:

Murray Whetung was married to Elva “Cobe” Taylor and they had 13 children. He passed away February 26, 2021 and was the last living World War II veteran living in Curve Lake. His granddaughter, Curve Lake First Nation Chief Emily Whetung highlighted her grandfather’s attendance at every Remembrance Day ceremony and his long service to the community. In honour of his service to Canada, and to his community, the Ontario government passed the Murray Whetung Community Service Award Act, 2021. The Act provides that the Minister of Heritage, Sport, Tourism and Culture Industries shall provide for an award to be given each year to a cadet in each local Royal Canadian Air Cadet corps, Royal Canadian Army Cadet corps and Royal Canadian Sea Cadet corps who is selected by their corps for demonstrating exceptional citizenship and volunteerism within their community and their corps.